Allu Arjun and his staff bid adieu to Lord Ganesh

Allu Arjun and his staff bid adieu to Lord Ganesh

Every year, Allu Arjun welcomes Lord Ganesh to his office and celebrates the festival of Ganesh Chaturthi with his staff in a grand manner. This year was no different. 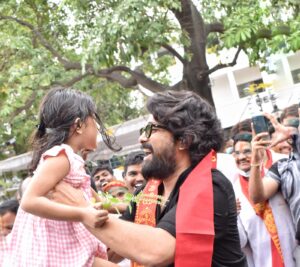 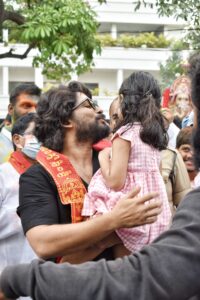 A recent video that went viral shows Allu Arjun participating in Ganesh Visarjan with his team. An actor with no airs and rooted to his culture, Allu Arjun did not hesitate to get on to the road to celebrate. He broke a coconut as he bid adieu to the Lord with his daughter by his side. In fact, he even encouraged Arha to be a part of the procession, witness the immersion closely and learn about the importance of the festival.