In November 2021, HEID was established to begin battery swap service in India starting with electric auto rickshaws. HEID’s battery swap service will enable rickshaw drivers to stop by at the nearest battery stations being setup across the selected cities and swap discharged batteries (Honda Mobile Power Pack e:) with fully charged ones. The use of this service will significantly reduce drivers’ initial cost to purchase EV as well as reducing concern about range anxiety and running out of batteries. 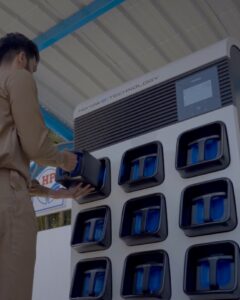 HEID and HPCL signed a memorandum of understanding and commercial agreement to collaborate in the field of E-mobility in February 2022 and have affirmed the mutual commitment through developing its swap station network. HEID has already set up its battery exchanger (Honda Power Pa ck Exchanger e:) at strategic locations among HPCL’s retail outlets in Be ngaluru and started its operation initially for electric auto rickshaws which applies Honda Mobile Power Pack e:.

HEID has strong will to create the largest battery swap network with more than 70 stations in Bengaluru in the following 12 months. Furthermore, ba sed on the success in Bengaluru city, the service will be expanded to other major cities in a phased manner.

Inauguration ceremony has been held on 6th August 2022, where both parties celebrated the progress of partne rship and reaffirm mutual determination to realize carbon neutrality and greener future of India by pursuing ele ctrification of small mobilities.

Executive Director-Retail, HPCL, Mr. Sandeep Maheshwari said that HPCL is committed to accelerate India’s tr ansition to greener energy. We are one of the biggest Charge Point Operators in the country with 1,058 EV Cha rging Stations at our retail outlets acro ss the country. Today, we are launching another game changing initiative in partnership with HEID. HPCL & HEID e:swap Stations will make swapping batteries a breeze for e-auto ricks haws at Bengaluru. Swappable batteries address the key EV adoption issues such as – high upfront costs, range anxiety and long charging time. Over 90% of the country’s vehicle sales are of 2Ws and 3Ws. The simplicity of vehicle design and the smaller battery packs needed to power the electric versions of 2/3Ws makes them a prime candidate for swapping. While Honda brings best-in-class technology to e:swap, HPCL with its 20,000+ retail outlets in the country and huge presence in all cities, will ensure scalability and smooth operations.

Executive Director-Corporate Strategy, Planning & Business Development, HPCL, Mr. Dharmendra Kumar Sha rma marked that the event as a small step towards taking a giant leap for revolutionizing the e-Mobility ecosys tem of India in the days to come. Wishing all the success to Honda, he said that with the kind of meticulous plan ning & detailed market research done by Honda in collaboration with HPCL over last 2 years in Indian markets, this is going to be a market disruptive move in transforming the e-Mobility markets for 2 & 3 wheelers in the years to come.