Chennai, 8 September 2022: The IDEMITSU Honda Racing India riders are all geared up to get head-to-head in thrilling battle for points as MRF MMSC FMSCI Indian National Motorcycle Racing Championship 2022 gets closer to the season finale.

As round 4 kicks off at the Madras International Circuit this weekend, 3 riders will race on Honda machines in Pro-Stock 165cc class of national championship. Adding more weight will be Honda’s 20 young guns who have their eyes set on the points that are crucial for championship titles in IDEMTISU Honda India Talent Cup NSF250R & CBR150R classes.

Supporting the IDEMITSU Honda India Talent Cup is Honda Hornet 2.0 One Make race. This round will provide opportunity to 15 Honda customers who will experience the thrill of racing on Honda Hornet 2.0 race machines. 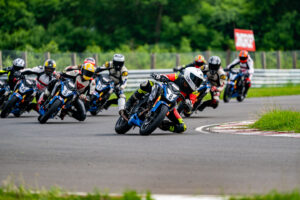 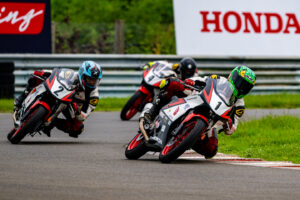 Speaking on the upcoming round, Mr. Prabhu Nagaraj – Operating Officer, Brand & Communication, Honda Mot orcycle & Scooter India said, “In the penultimate round of the championship, our riders are all set to power up their per formances by pushing the throttle to its limit. With high spirits from bagging top 5 finish in the Asia’s toughest racing cha mpionship in Japan, Rajiv Sethu is highly motivated to do well this weekend. Meanwhile, our next-gen racing sensations are riding with passion in IDEMTISU Honda India Talent Cup. Sarthak Chavan and Raheesh Khatri will be looking for wa rd to wrap-up the championship titles in NSF250R & CBR150R classes. We are optimistic of seeing more action-packed performances this weekend.”

Entering 4th round with 105 points, the IDEMITSU Honda SK69 Racing Team is placed at third position in the cha mpionship. Riding on the back of 1 win and 3 podium finishes, Honda’s ace rider Rajiv Sethu is second on the sco reboard and has 73 points to his name. Whereas his teammate Senthil Kumar is on 10th position with 32 points followed by ASK Honda Racing’s Abhishek Vasudev on 11th with 30 points in the championship so far. 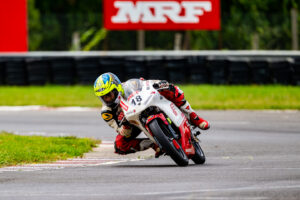 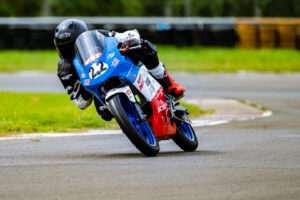 The weekend race of IDEMITSU Honda India Talent CUP NSF250R will witness 12 millennial riders going wheel-to-wheel for championship points. 2022 has been an immensely successful season for Pune’s Sarthak Chavan. With back-to-back six wins, the international rider tops the chart with 150 points. Following him are Chennai’s Shyam Sundar (93 points) and Bengaluru’s AS James (79 points) who currently stand at 2nd and 3rd positions res pectively. Challenging them are Mohsin P, Prakash Kamat & Vivek Kapadia among the others.

In 8-riders grid of IDEMTISU Honda India Talent Cup CBR150R, Mumbai’s Raheesh Khatri sits in a commanding position with 150 points. Next on the list are Chennai’s Shyam Babu and Kolhapur’s Siddesh Sawant who are se parated by 6 points in their standings.