The weekend was the ultimate test of man and machine and JK Tyre’s Gaurav Gill showed immense grit and push ed his car to extremes in the baking heat of Athens. Blinding dust trails with almost negligible visibility, bent low er arms, completely worn out tyres made the drive even more challenging and dangerous for the Arjuna Awarde e but he kept his pace in all the stages.

On Saturday after stage 8, Gill was placed 9th in His class with a difference of 30.8 sec from the leader Andreas Mikkelsen. Gill who is a master of gravel and manoeuvring tough terrains, worked up his paces and upgraded hi mself through the remaining stages of the event. In the penultimate stage, Gill gave a tough fight to his fellow drivers and outpaced season leader Mikkelsen and seasoned WRC 2 campaigner from Czech Martin Prokop. Prokop was approx. 8 seconds behind Gill in Stage 15. 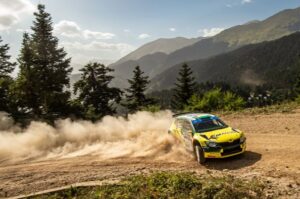 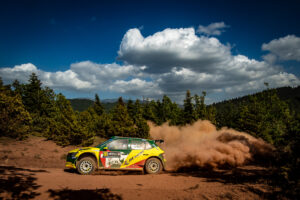 Gill was just 7.49 minutes off from the WRC 2 leader E. Lindholm across special stages of 303 kms out of total distance of 1192 kms and concluded his campaign @ 1.5 sec per km off the pace from the factory team driver. It indeed was a celebratory moment for Gill as he left the championship frontrunner Mikkelsen 4 seconds behind in the final stage of the rally. Clocking some of his best times, compared to seasoned WRC top category he was just 3 seconds off per km to far superior cars of overall WRC leader T.Neuville who is Hyundai Works team driver.

At the end of three gruelling days, India’s Gill sealed a sixth-place finish in WRC 2 in a grid of 35 cars which is co nsidered a historic entry of the season in the category and 12th overall in 70 grid Acropolis Rally Greece ahead of some of the biggest names of WRC K. Rovanpera, T. Sunninen This achievement is no mean feat and it takes an experienced driver to conquer the toughest stages of the world and finish the rally in style.

“The Acropolis Rally has been one of the toughest rallies that has put our car and tyres to extreme tests. It was a tough weekend where we faced multiple issues but that’s how this Rally treats you. Almost zero visibility forced us to stop every few kms as it was dangerous, but overall it was a unique experience for me and Gabriel,” said Gau rav.

The Acropolis Rally Greece covered a total distance of 1192 km including 16 Special stages of 303 kms.