Coimbatore, September 18: Arya Singh and Sandeep Kumar from Dark Don Racing shared a race win each in the LGB Formula 4, the premier class of the 25th JK Tyre FMSCI National Racing Championship at the Kari Motor Sp eedway in Chettiapalayam here on Sunday. 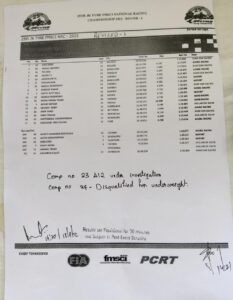 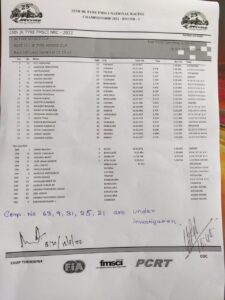 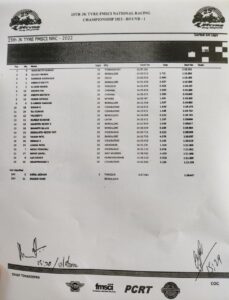 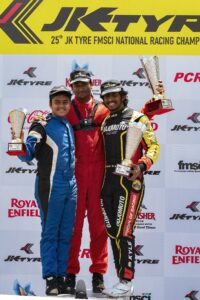 The soaring heat did not deter the competitors who went about doing their job with earnest sweat. All they wan ted to do was to was to make a strong first impression in the season’s opening round of the Silver Jubilee edition. And, the sporting fans got to see some exciting action on both days.

Starting the day, DTS Racing’s Kyle Kumaran, who completed a grand double on Saturday by winning both the races of the JK Tyre Novice Cup, saw a bit of challenge around the corner. Of course, the reverse grid was in play and, the Chennai youngster, starting eighth, knew he had to dish out something special to secure a place on the podium. 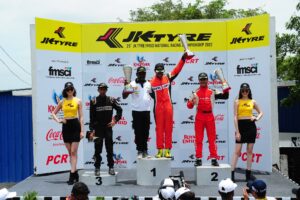 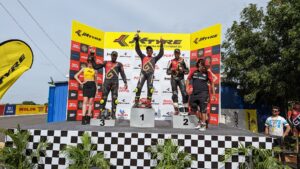 He worked hard for it and, with the safety cars visiting the track time and again, Kyle planned his every move an d went on to challenge city-mate Aadithya Parasuram of Hasten Performance. But the latter, who enjoyed the fr ont slot, kept it calm right through to take the checkered flag. That did not matter for Kyle. He was neverthe less pleased to have sealed the second spot followed by Bengaluru’s Dhruvh Goswami in the third place.Later, Kyle shot back strongly to finish on top of the podium in the second race and, with it, completed a sweet double.

After Aadithya’s gutsy show, it was time for Arya Singh of Dark Don Racing to show his smartness and strength in the premier race for the LGB Formula 4 cars. Arya won the opening race hands down the other day but, this ti me around, he found the Ahura Racing stars Amir Sayed and Viswas Vijayaraj breathing down his neck. He did not see it coming so early in the race but defended his position well in the first two laps to gain the early advan tage. And, once he did, there was no stopping him. 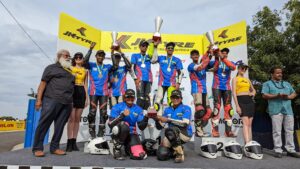 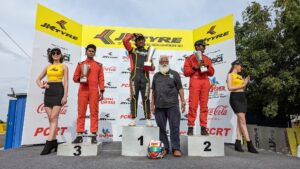 “I always go with a clear plan never to finish below from where I start and, today, I started on P1 and am happy to have finished in that position,” said the Kolkata boy after the race.

The new addition, the JK Tyre presents Endurance League Cup, powered by United CRA, saw the riders chalking out multiple strategies. Twenty-five teams lined up of which most of them were first timers. Interestingly, despi te the many challenges, all the 250cc race bikes, ran successfully. And, Abhishek Vasudev and Amarnath Meno d uo combined well to finish on top with a total time of 1:00:57.449s.

Race 3 of the JK Tyre presents Royal Enfield Continental GT Cup, saw wheel to wheel action as Navaneeth Kum ar from Pondicherry lead the pack by finishing on pole position in the Pro category followed by Ullas S Nanda fro m Bangalore finishing second and Sudheer Sudhakar from Delhi in third position. In the Amateur category, Soor ya PM from Chennai finished first followed by Varun Gowda from Mysore and Rohan R from Coimbatore in the second and third place respectively. 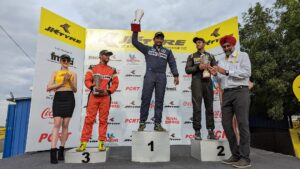 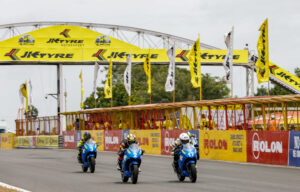