Chennai, August 8th, 2022: Skyways Group, a major player in the logistics sector founded in 1983, celebrated it’s 40th Founders Day on 8th August and marked the occasion with a press conference in Chennai at The Residency Towers as it coincided with the company’s 20 years of operations in Chennai. At the press conference, the logis tics major highlighted its South India expansion strategy.

Chennai is an important city for the logistics players in India as it sits in one of the most industrialized states in the country, Tamil Nadu, having the highest number of industries country-wide. Moving forward, Skyways will expand its operations in Chennai, Tamil Nadu and the entire South India. The region, in particular, has registered higher levels of development in terms of manufacturing space over the last few decades.

Mr. SL Sharma, Chairman Skyways Group, said, “We would like to express our gratitude towards everyone who has been a part of th is glorious journey. Skyways Group’s 40th Founder’s Day is a histo ric milestone, built on the bedrock of ethics, values and trust. Over the past four decades, Skyways has remained committed to the in terests of all customers, principals, partners and team members at the forefront of all its actions. Being a comprehe nsive solu tion provider and offering its clients services they can rely on, the gr oup is now looking to expand its services further to the manufacturing cities in South India. We also wanted to take advantage of the growing sea trade in the region to expand our ocean logistics under our Forin Container Line, our Group Company.”

“We are a team of 55+ employees in Chennai and about 200 in South India currently. Given the economics of the regions, we believe there is a sizeable scale to grow our headcount and operations. We currently operate in 4 citi es in Tamil Nadu and 8 cities in overall South India. Also, given the fact that Tamil Nadu is the automobile capital of India, with around 40% percent of the automobile industry having a base here along with being an electronic manufacturing hub, Chennai is a significant city for Skyways from a business perspective. Also, the climate is ext remely favourable, given the government policies providing a push to the manufacturing sector. Our prominent presence in South India is also in Bangalore, Coimbatore, Hyderabad and Kochi. We feel it’s the perfect time to further expand our business to the southern part of the country, said Yashpal Sharma, Managing Director, Sky ways Group.” 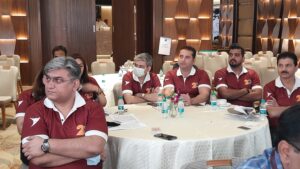 Skyways Group is eying the South Indian market as many cities including Trichy, Madurai, Coimbatore, Tiruppur, Karur, Vellore, Tiruchirappalli, Ambur, Thanjavur, Madukkarai, Alangulam, Cudd alore, Pallipalayam, Bhavani sag ar, Thulukkapatti, Perambur, Mys ore, Hubli, Belgaum, Mangalore, Calicut, Trivandrum, Vizag, Vija yawada, Sri Ci ty etc. are anticipated to have outsized manuf actu ring industries in the next few years. Also with government init iatives and plans such as the PM Gati Shakti National Master Plan and PLI scheme, these cities in South India will further get a boost as this will incentivise manufacturing. The ambitious Gati Shakti programme aims to cre ate a more comprehensive and integrated planning approach and execution of projects. This will in turn bring down the logistics cost and lead to economic viability for end con sumers, farmers, conglomerates and busin es ses. This will help in connectivity to economic zones and further increase job opportunities as well as faster movement of goods, such that we become a $5 trillion economy by 2025 as indicated by financial experts and economic researchers.

‘’With Skyways having its presence in South India, we will usher into boosting air freight opportunities as a lea ding Air Freight Forwarding company in this region as well by bringing in new products capacity enhan cement initiatives. We have laid out a solid expansion plan for South India across our group companies. Through sKart Global express, which is our express and e-commerce logistics company, there is a big push to empower MSME in the region by giving them access to technology and global network and connect them to the 7+ billion people ar ound the world. Our Training Wing, SLS Logistik Academy will skill the region’s workforce and enable them to be industry-ready, thereby adding strength to the PM Gati Shakti programme. Technology sits at the front of all our group companies and our trucking arm, Phantom express, has been helping customers in avoiding wastage and cutting logistics costs for them. As a group, we plan to expand to another 12-15 cities in

South India and add a workforce of approximately 500 personnel over next 3 years,” added Yashpal Sharma on the expansion plan.