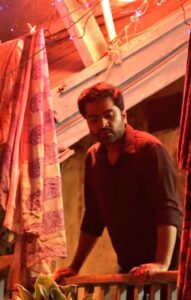 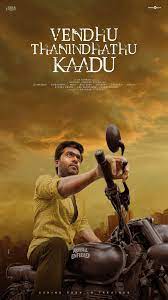 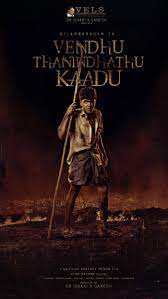 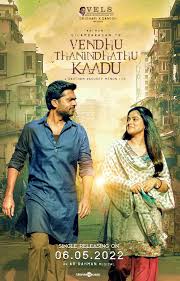 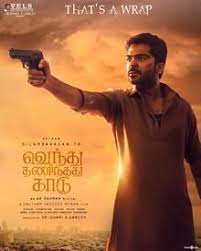 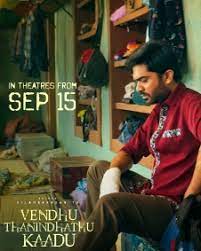 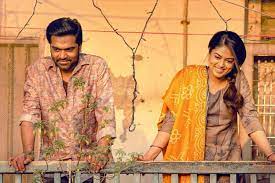 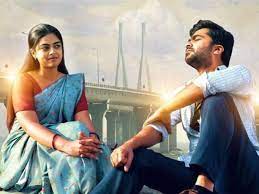 Muthu Veeran (Silambarasan) after passing out B.Sc tries to adjust to lifestyle of a thorn gatherer in his village. But during a forest fire, thorns pierce into his body and his mother (Radhika) unable to see her son like this, de cides to go to her long lost brother for help. After initial hesitation, he accepts to take him to Mumbai with him. He asks Muthu to stay with him. During the night time, Muthu sees his uncle talking to someone in a trembled voice and finds out a gun in his uncle’s bag. Later his uncle gives him a letter and asks him to give to his partner in Mumbai under any circumstances. Next Morning, he commits suicide and Muthu hides the gun. 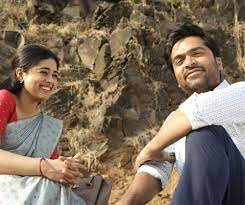 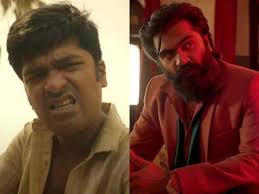 Muthu takes the gun with him to Mumbai. He promises to his mother that he would do anything that he can for earning a decent living. In Mumbai, he finds the Parotta Stall that his uncle addressed and the owner asks him to join them. More than 36 members stay in one room and he decides to adjust. Slowly, he understands that every one living with him is used as a contract killer or local goon. He plans to escape from that place but during a sho otout and surprise attack, he finds himself being dragged into the fight unwillingly and he picks up the gun to defend himself. What happens next? Where does his life lead to? Who are his friends and who is Paavai (Siddhi Idnani)? Watch the movie to know more…

Gautham Vasudev Menon’s Vendhu Thanindhathu Kaadu is most fascinating when you zoom in on the small ste ps it takes within the gangster movie genre. Written by Jeyamohan, it is as much the coming-of-age story of a hel pless Muthu (Silambarasan) from Naduvakurichi as it is about an outsider entering and then making it in the wor ld of crime in Bombay. But the fusion of these two narrative threads is so harmonious that there’s no disso n ance between the internal journey of a man destined to a life of crime and the external journey that traverses la ndsc apes, morality, language, and time. Actor Silambarasan TR starrer Vendhu Thanindhathu Kaadu, written by Jey amohan and is directed by Gautham Vasudev Menon. The movie features musical score by AR Rahman and is ba nkrolled by Dr. Ishari K Ganesh of Vels Film International.A fatalistic approach to Muthu’s destiny is planted in our minds right from the first scene. Having graduated with a bachelor’s degree, 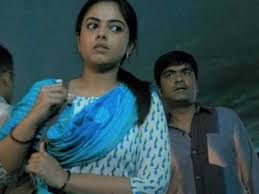 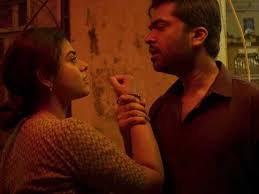 Muthu asks the postman if he’s brought the good news of a job letter. In the arid thorn bushes that Muthu calls h ome, a job is the safest escape route. But instead of an appointment letter, the postman brings fate in another for m when his half-lit beedi bu rns down all of Muthu’s farmland. Left with the image of a hundred thorns piercing into Muthu’s back, we’re also imagining him as the man who got stabbed in the back by the same parcel of land th at’s meant to feed him. The st ory traverses through the life of an ordinary youngster Muthu (Silambarasan TR ), whose journey from a remo te village in Tamil Nadu to Mumbai changes his course of life. An inescapable feeli ng of hell surrounds Muthu wh erever he goes; an astrologer had warned Muthu’s mother that her son would inevit ably become a murderer. It is the same inevitability that finally leads him to Bombay as well. 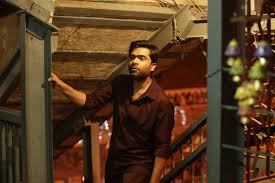 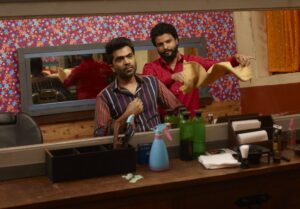 When given the choice between a suitcase full of cash and a pistol, he doesn’t choose the former and it’s as thou gh he doesn’t know why. It’s fate making the first move yet again when we see him reach Bombay without a lot more than a loaded gun. Paraphrasing a line from the film, it’s the gun that chose Muthu and not the other way ar ound. The hype never missed to slip down with the entire crew vigorously assuring us VTK has baggage of surpri ses and enthrallments for the audiences. Especially, the changeover of STR, lovely songs by AR Rahman and maki ng style of GVM had more reasons for us to watch the movie. Yes, these elements are found in plethora as you go through almost 3-hour crime drama, but what actually becomes a problem is the engrossment. Filmmaker Gauth am Vasudev Menon, during the pre-release promotions cited that audiences will have to be patient with the slo w progress of the film’s screenplay as it would take some time to get used to the characters. 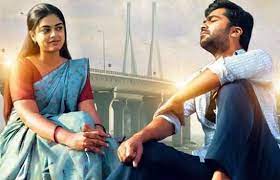 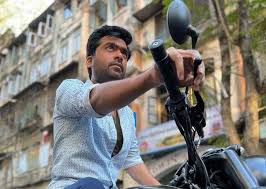 Brimmed up with such a mindset, we are too tested with the slowness. The basic problem is that the major portio ns of the film look repeated as both gangs keep hitting against each other, but none of the characters catch up ou r attention. Except for the characterization played by Appukutty, the other roles remain vague. The actual intens ity picks up by the Pre-Interval action sequence, which is filmed in single-shot. It gives an assurance that the seco nd half will have racy moments, and we end up watching the tempo remain the same.Muthu’s destiny seems bigg er than he is and this is the case with the people inhabiting his new world in Bombay. Every important character we meet here is somewhere along the same journey Muthu has taken. At one end is his boss who predicts an end ing at the hands of Muthu. Far closer to the starting line is a character who becomes a mentor; he gives Muthu hi s first drink and assignment and through him, we see Muthu sensing his own future, at least in terms of a family. 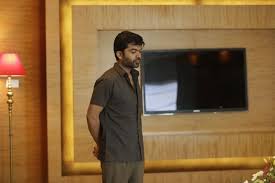 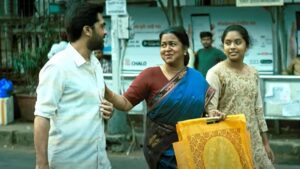 Yet it is the character of Sreedharan (Neeraj Madhav) that makes Vendhu Thanindhathu Kaadu feel like a depart ure from the gangster films we’ve seen before. The subtext about fate and destiny doubles down when we see Sr eedharan as the mirror image of Muthu, arriving in Bombay on the same day, perhaps on the same train. Their pa ths keep converging and in the beginning, we sense that it is Sreedharan who got the raw end of the deal. Thr ou gh Sreedharan, we’re constantly watching another story unfold although the blanks are being filled by us subco nsciously. What was until then a story about a man who could not escape his fate, evolves slyly on the side into a parallel story about a man who actually could. Silambarasan TR has become the director’s actor, and has done hi s part very well. His changes in mannerisms from the initial moments to the latter part of movie are spellbinding. Siddhi Idnani has graceful screen presence, but her portions have nothing to do with the movie’s main plot. Nee raj Madhav’s characterization looks feeble though he is a talented actor. 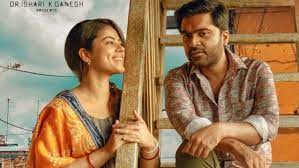 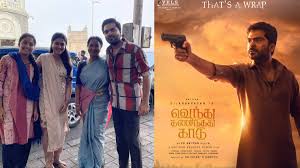 Malayalam actor Siddiqui is good with his performance. Appukutty steals the show with his best works. Althou gh there are other actors in the movie, they don’t manage to impress us. Radhika Sarathkumar appears in 2-3 sce nes and as usual delivers her best.It is a fascinating new direction to take to answer one of the genre’s most repe ated questions—can a gangster ever escape the system he/she becomes a part of? In one of the film’s best dialog ues, we’re told that people like Muthu are just screws that form a part of a huge machine, without even knowing what the machine does. Despite his best intentions, we see Muthu make the same mistakes his colleagues have made before him. And when the film ends, it gets you to go back and question the high you felt during its epic int erval sequence. Should the gun have remained where it was? Is that where Muthu crossed the mellisana kodu? On the technical aspect, it’s AR Rahman show all the way. He has worked at his best in re-recording. 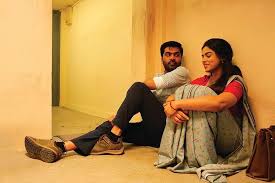 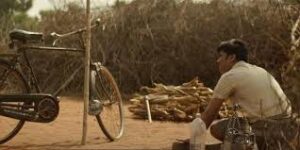 The special surprise is a rap kind of song during the action sequence, which is still unreleased in album. The actio n sequences are perfectly choreographed. The ending of VTK is so artificial. GVM has always faced an issue with the climax of few movies, and hence, it looks like he has gone for an open ending. The climax scene shot 2-3 wee ks before the film’s release looks like a hurried one, and doesn’t give a complete ending.Jeyamohan’s writing is deftly complemented by Gautham Menon’s filmmaking style, especially when the outsider gaze contributes to a feeling of isolation and discomfort in a punishing terrain early on and then in a strange new city. A testament to this is how the film maintains the claustrophobia even when we shift from the stuffy top floor of a parotta shop into the seedier bedrooms of a five-star hotel suite. The consistent use of long takes for action scenes as well as the songs further unifies the broad themes of a film into one singular vision.On the whole, 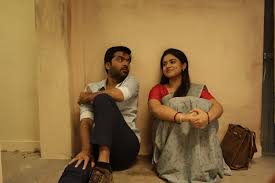 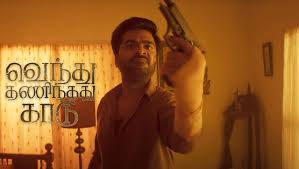 Vendhu Thanindhathu Kaadu has stylish visuals, tremendous music, brilliant act by Silambarasan, but everything goes eclipsed by the feeble writing.Ironically, for a Gautham Menon movie, it’s the romantic portions that feel of f-tone in what is a deep dive into a man’s inner battle with his fate. The conversations between Muthu and Paav ai (a slightly out-of-sync Sidhi Idlani), feels too “woked-up” and eager to prove a point that it feels unnatural and forced. It is when other characters enter this equation that we sense life being breathed into it. An example of th is is when we see all of Muthu’s cynicism enter into a hilariously transactional meeting between him and Paavai’s parents.I was equally indifferent to the staging of ‘Unna Nenachadhum’. Again, with cinematographer Siddhart h a Nuni’s single shot, the effect, I assume the makers wanted, is that of a song taking over what looks like a regula r conversation between lovers. Without the usual flourishes and choreography, it is as though these lovers are simply speaking to each other in poetry, only for it to “sound” like a song that is playing to the viewer. 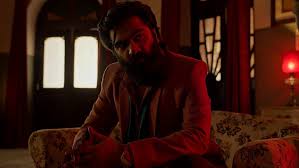 I experienced a similar indifference to the way Rahman’s wonderful songs were broken down earlier to stitch up different portions early on, even when the film itself isn’t able to create that cohesion. Add these parts to a tota lly underwhelming sequel bait and you find the stellar portions of the film getting diluted by what felt like afte rt houghts.A major reason why we never feel the full blow of these portions is how STR is able to play Muthu. Even with the film’s limited timeline that spans a few months (not including the epilogue), we see every bit of Muthu tr an sforming from a powerless nobody into a beast who does not want the powers he’s been given. STR gets us to feel the body-ache Muthu feels when we see him limping from place to place in his village. He also gets us to feel the difference when the gait becomes more confident after his transformation. With a perfect return to form for both director and his favourite lead actor, Vendhu Thanindhathu Kaadu is a film that gives you that rare joy of “r ediscovery”. It is that sweet spot you land on when talented artistes reinvent themselves without losing the ess ence of who they are. It also brings with it the notion that they have lots left in them to offer.